Mungolian Jetset: We Gave It All Away, Now We Are Taking It Back 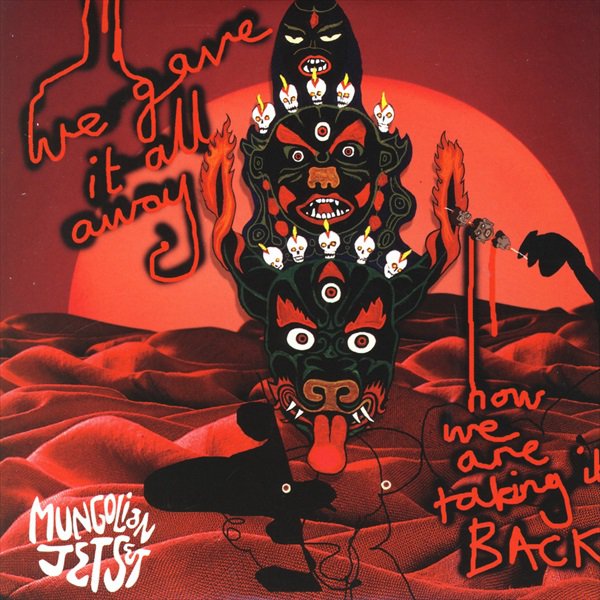 Smalltown Supersound is proud to present you to the exschloctic tastes of Mungolian Jetset. With the album We Gave It All Away..And Now We Are Taking It Back, out August 18, 2009, the Mungolian collective mixes all of their work, remixes, covers, collaborations and originals into not just one, but in true prog rock manner, two albums (each counting in at 59:15,) as they are intended to be heard. The flavors cover everything from house and disco inspired cheekiness via shameless dabblings with soft rock/Norwegian west coast, balearic, dub and ambient, psychedelia and techno, all melted into one giant wormhole of sound, or should we say zone. Imagination is pretty much the key to Mungolian Jetset's aural ingredients, even imaginary. One of their spokesmen, Paul "Strangefruit" Nyhus, keeps insisting they operate as channelers for a parrallel world of Mungsters, an ancient breed of intergalactic travellers in sound, working within the time-space continuum. Throughout their history it has become clear that they are not just a band hell-bent on producing the spaciest jazz ever heard, but that the Mungolian Masterplan is much darker and insidious, evolving to produce increasingly distinctive yet completely mind-absorbing beats to underpin a whirling vortex of sonic chaos, psychoacoustic bass warping and lavish and unbridled costumery. Legends of their remixing skills abound throughout the known world and, some might say, beyond. Defining a Mungolian Jetset remix is close to impossible, yet the beat is what immediately lets you know that you've arrived in the state of Mung. They probe the track carefully, and locate the Mungolian zone within it, before shaking it into a trancelike psychedelic wormhole that snakes through the souls of disco and bucket brigade dub. So, apart from all of this gibberish, what kind of album is We Gave It All Away...And Now We Are Taking It Back? It's all in the title, as it features collaborations and remixes, once given away (most of the tracks featured have been previously released individually on vinyl 12-inches or in some other form,) and now taken back, to be presented in its full Mungolian context. So here you will find Mungolian Jetset hanging out with Mari Boine and Ronny And Renzo in a lavo within the centre of the earth, the bizarre Lindstrøm/Dominique Leone encounter aka 16th Rebels Of Mung, as well as journeys with norwegian jazz-kraut legends Eivind Aarset and Nils Petter Molvaer, psychedelic meetings at the mixing desk with The Shortwave Set and They Came From The Stars, excessive trippings at an italian nightclub with LSB, hanging out in L.A. June 1984 with Athana, and taking Ost & Kjex to some cabaret show in a giant barber-shop, meeting the ghost of Michael Jackson, reuniting with Lindstrøm in a turkish bath as well as a couple of exclusive originals and last but not least, their beyond zonked-out cover of "Could You Be Loved" under the moniker Pizzy Yelliot. File under: Fantasy