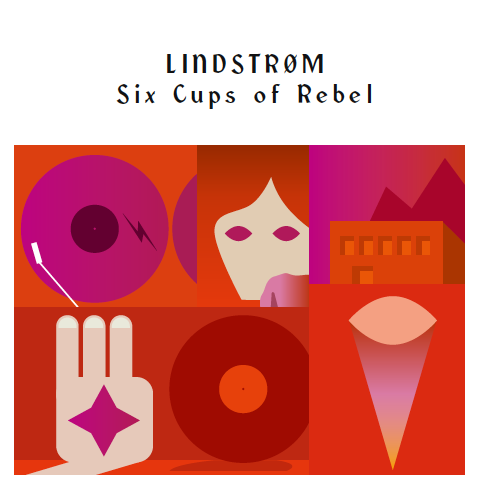 Five… four… three… two… one… With the latest album from dance producer Hans-Peter Lindstrøm, Norway’s latest entry in the space race has been launched out of the wooded outskirts of Oslo. Six Cups Of Rebel, Lindstrøm’s fourth solo album, is a super-sized cosmic disco rocket that burns up a galaxy of eclectic influences in its wake, from Bach to Deep Purple, from Prog rock and arpeggiator disco to Acid House, while sounding sleek and utterly contemporary. He may worship at the temple of godlike European DJs from the 80s like Daniele Baldelli and Beppe Loda, but the relentless, occasionally monumental scale of Six Cups Of Rebel has the power to move mountains all by itself.
From the opening “No Release” – a five-minute coitus interruptus of cascading cathedral organ – to the pumping Detroit pistons of “Call Me Anytime” and the wah-wah stabs and fizzing 808 basslines of the title track, Six Cups Of Rebel acts like a star map of Lindstrøm’s own voyage to the outer limits of electronic music. When he holds back, as on the ten-minute “Hina”, it’s only to let rip with added propulsion, like a satellite using a planet’s orbit to push it to the next level. In the Lindstrøm discography stretching back to 2003, albums tend to be a small interruption in a constant stream of remixes and 12”s (including one, under the anonymous moniker Six Cups Of Rebel, on the Feedelity label in 2005). He forms part of a constellation of Nordic producers that includes Diskjokke, Todd Terje and Bjørn Torske, Prins Thomas, He also regularly collaborates with fellow Norwegian space disco wizard Prins Thomas, whose self-titled album received much acclaim last year. But is the ‘cosmic disco’ label a medallion or a millstone? “If ‘cosmic’ means music without any limits, I don’t mind being discussed in these terms,” says Lindstrøm. “I guess my definition of ‘cosmic’ comes from listening to mixtapes from Daniele Baldelli, Beppe Loda and other ‘cosmic’ DJs. And what is typical of the music that these tapes consist of, is a wide range of diversity, both in musical style, sound and genre. I leave it to other people to label/tag my music this or that, but it’s true that these legendary tapes has been a massive inspiration for me over the years. I really believe in mixing up everything, and having no respect for the traditional way of doing things.” One major innovation on Six Cups Of Rebel is the use of vocals, a first for Lindstrøm. On “De Javu” it mutters about “that feeling that you’ve been here before” – an uncanny sensation that echoes his own music. There’s “Magik”, with its eccentric falsetto call and response, and the sarcastic laughter in “Six Cups Of Rebel”. Lindstrøm: “I have to admit that the decision of including vocals has been with mixed feelings. I’m no vocalist, but I wanted to include my own voice this time. I’ve been trying out different approaches on how the inclusion of vocals would sound ‘right’ for the music. In the end, I decided that everything was allowed, including pitching, stretching and all kinds of voice-processing and manipulation. The vocals here isn’t the most important element, but just another part of the music, as important as the cowbell, the ARP Solina string synthesizer or the free-running arpeggios. Lyrically, I’ve been more interested in repeating mantras, simple repeating sentences without any other meaning than what’s being actual said or sung. Might sound stupid for others, but makes perfect sense to me.” Unusually for a dance album, it’s introduced with a grand swell of mighty church organ, an aching tension-builder that refuses drop th beat for a tantaslising five minutes. “I initially planned to do this live in a church somewhere,” says Lindstrøm, “but I really like that semi-natural feeling you get when combining MIDI-organs together as one big-sounding artificial church organ. So I ended up doing it in my studio instead.” He cites the likes of Jon Lord, whose gnarly organs gave so much classical flavour to the early Deep Purple. “I wanted to give the opening track that ‘larger than life’ feeling, similar to how I remember those old Heavy Metal albums from my youth. And nothing is larger than a church organ…” “Quiet Place” is the album’s other major curveball: an eccentric club banger that pleads, “All I want is a quiet place to live”… Not the normal sentiments of a man who spends much of his life rocking international dancefloors. “It’s just a simple desire to live somewhere quiet,” he says. “Nothing fancy. In fact, I do have a cabin in the woods just outside of Oslo that’s being used for recreation, and growing of vegetables and fruit trees. And I don’t find that too weird for a dance track. I mean, who hasn’t been to a disco, dancing to boring music, wishing for someplace else? I do that all the time.” In fact, for an audio astronaut, this music’s maker is surprisingly down to earth, a family man turning out his music from a factory floor-type existence. “Well, I don’t believe in sitting up all night drinking and waiting for that special moment of inspiration. I’m working every day at the studio, nine to four, and I’m totally happy with a straight lifestyle. Being away on tour for more than four days makes me uncomfortable and grumpy. In fact I usually get homesick before I leave home. I love Mondays, and discovering that everything is just as I left it on Friday afternoon...” It’s not rocket science: Six Cups Of Rebel might just be the finest dance record of 2011.