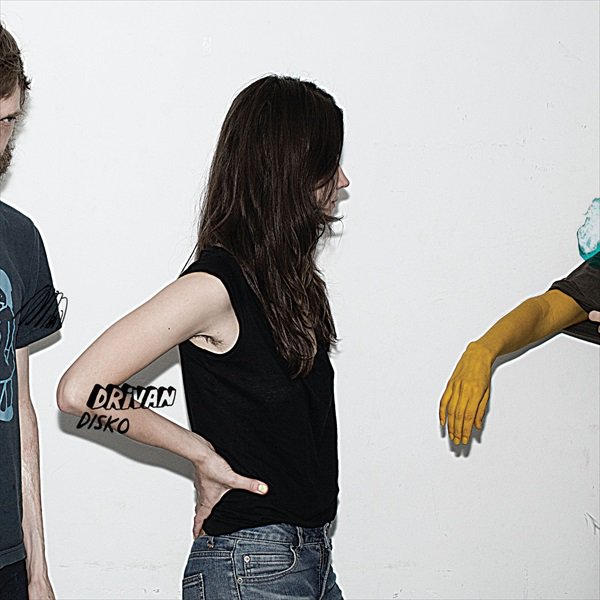 Releasedate 18. August 2010 on CD, limited edition LP and download. You can buy the CD and LP (on white vinyl) from our mailorder here Drivan is a new band by Kim Hiorthøy, consisting of Kim, Swedes Lisa Östberg and Louise Peterhoff of Sweden, and Kristiina Viiala of Finland. The group met in Stockholm in the fall of 2007 while working together on a multi-faceted dance piece by choreographer and performance artist Gunilla Heilborn, entitled The Potato Country. The moving, yet humorous performance piece incorporated spoken word and songs written by Hiorthøy, which were fleshed out with the help of his new collaborators. Upon the completion of its run in Stockholm, Hiorthøy asked Lisa, Louise, and Kristiina if they would be interested in collaborating further. In early 2008 the group met in Skåne in the south of Sweden, where they worked on initial sketches and tracks in the remote house and studio of Bebbe Risenfors. New songs were written and subsequently recorded in Stockholm during the fall of that year and spring of 2009. Most of the tracks on the finished album, Disko, began their evolution as a Kim Hiorthøy loop, eventually being built upon by all the collaborators. Drivan is a group first and foremost, with everyone cooperating on lyrics and melodies, and although there are flourishes of Hiorthøy’s signature sound, the recordings’ folk-oriented and organic feel has the band drawing more from Swedish folk and prog of the 70s, as well as Stina Nordenstam’s People Are Strange album. Sung entirely in Swedish, a lot of the songs on Disko revolve around themes of collectivity and the salvation of something through destruction. Although some of the meaning is lost in translation, lyrics like "If you lose your memory, I will lie about everything in your life" and “Everything we did/we'll do it better later” resound as clearly in English as they do in Swedish. The lyrics to the opening track, “Som en Läderlapp”, which can roughly be translated to “Like a piece of leather”, take some inspiration from “Bat Out of Hell” by Meat Loaf. (“Läderlapp” was also the original Swedish name given to Batman when the comic was first published there). Backgrounds: Kim Hiorthøy is based in both Berlin and Oslo, but has mostly lived in Berlin over the last couple of years. Extraordinarily talented and a veritable jack-of-all-trades, Kim operates in many different artistic fields in addition to music. He’s released three albums – Hei in 2000, Melke (a collection of remixes, 7 inches, rarities and unreleased tracks) in 2002, and 2007’s My Last Day, as well as several singles and EPs. As a graphic designer he is responsible for the album artwork of Rune Grammofon and many Smalltown Supersound releases. He’s an artist represented by Standard Oslo (www.standardoslo.no) and a writer published by Norway’s Oktober Forlag, who published Kim’s Du kan ikke svikte din beste venn og bli god til å synge samtidig. He released a design book called Tree Weekend with Germany’s Die Gestalten Verlag, a book of photography in Japan, and a book of drawings entitled Alt Fins,. Additionally, Kim has illustrated several children’s books. Kim has worked in film as a photographer, having shot the acclaimed Norwegian movies Kroppen Min and Ungdommens Raskap, as a video director for the concert film Supersilent7, and as a filmmaker, having just debuted as a director/screenwriter on the Swedish/Norwegian co-production, Hur Man Gor. Lisa Östberg, Louise Peterhoff, and Kristiina Viiala all have backgrounds in the performing arts and work in a variety of capacities; Lisa is currently acting in a feature-film she also co-wrote, Louise is touring with a Belgian dance and theatre company and preparing to start rehearsals to perform works by August Strindberg with a theatre in Stockholm in the fall. Kristiina is collaborating with Mattias Fransson from the Swedish comedy group Klungan as well working with Gunilla Heilborn, the director of The Potato Country, on her new piece.